This year, Eastside Highway District and the City partnered to apply a chipseal surface to the corridor to preserve its life. In an effort to meet the goals of the master plan as approved by City Council and to make efficient use of taxpayer funds, Coeur d’Alene Lake Drive was reconfigured through restriping to the current three-lane section. Traffic volumes, both present and future forecasts, do not warrant the four lanes created for the former highway and maintaining the additional width with limited maintenance funding is not an efficient use of taxpayer money. The reconfiguration saved money for this project and will reduce future costs. It is worth noting that the passing lanes were removed for less than one mile of the approximately 5.5-mile corridor, or approximately 15%. Passing lanes did not exist beyond Silver Beach Road, where complaints of slow drivers are generated due to sight-seeing along the Lake.

Although no pavement is planned to be removed at this time as depicted in the master plan, an approved future development between the Coeur d’Alene Golf Course and Bakery by the Lake will provide separation at the time of construction. In the short-term, additional pavement markings will be installed on the Centennial Trail to better define it as strictly for use by pedestrians and bicyclists. The new bike lanes adjacent to the travel lanes are intended for faster-moving athletic bicyclists to avoid conflicts on the trail where slower-moving sight-seers, dog-walkers, and others enjoy the trail. The double white lines spaced two feet apart are not the bike lanes, but rather are the buffer spaces for the bike lanes, providing additional separation between the motor vehicle travel lanes and the bike lanes. Contrary to comments received, this does not place bicyclists in dangerous proximity to cars, because prior to the restriping, only an eight-inch-wide line provided separation between cars and trail users.  Also, the striped bike lanes are not intended for two-way bike riding.  The new configuration has bike lanes on each side of the roadway designed for one-way bike traffic as indicated by arrows in the bike lanes. Turning across these double white lines is no different than at other buffered bike lanes in the City, such as on Seltice Way.  Additional double-white-lines were installed to separate the bike lane from the Centennial Trail. In the future, pavement may be removed and landscaping added to accomplish this separation.  Please note, parking on and driving within the Centennial Trail is not permitted, nor has it ever.  The master plan does not call for on-street parking along Coeur d’Alene Lake Drive.

The two-way left turn lane was added to provide safe left-turn areas and separation between directions of travel. Prior to the restriping, no left turn lane was available at the Coeur d’Alene Golf Course or at the Rutledge Trailhead. A double set of double-yellow lines at these locations prohibited left turns. The new two-way left turn lane varies in width to maintain consistent widths for travel lanes, bike lanes, and the Centennial Trail as the pavement width varies.  The new configuration for Coeur d’Alene Lake Drive meets the intent of the Coeur d’Alene Lake Drive Master Plan, increases separation between the Centennial Trail and motor vehicle traffic, reduces potential trail conflicts, improves safety for turning vehicles, and reduces future maintenance costs.

See images below for the master plan concept and photos of the new pavement markings. 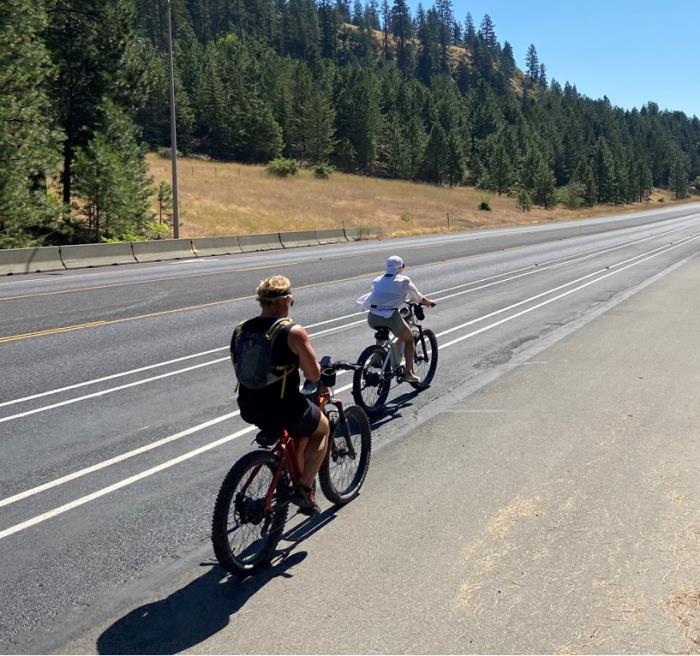 The “Activate East Sherman” Pilot Project on the 1600 block of East Sherman will be concluding after the Labor Day weekend.  Volunteers will be removing the parklet seating structure in front of Moon Time and moving planters out of the street on September 7th.  The City’s Streets and Engineering crew will be moving through the area starting on September 12th, weather permitting, to remove the white reflective bollards and revert the parking spaces and roadway centerline back to the original configuration.  The City-owned pocket park on this block will remain, along with the benches and planters on the sidewalk that were donated for the Pilot Project.

You may wonder why the pilot project is concluding, and what will happen next.  Following the initial launch, the City heard mixed responses from business owners, residents and City leaders, as well as City staff on how well some of those Pilot Project design and amenities have been working.  One of the main concerns was with safety on the block as a result of the traffic diversion and “bulb outs” at the intersections because the temporary improvements were only on one block.  There were also issues with snow removal.

A survey was done during the initial Pilot Project when it launched in 2018 provided some helpful feedback.  The rankings of the Pilot Project Features, based on 520 survey responses, were as follows from one (1) to seven (7):

Following the initial launch, we have heard mixed responses from business owners, residents and City leaders, as well as City staff on how well some of those Pilot Project design and amenities have been working.  Below is a summary of some of the Pros and Cons that we have heard.

Some of the Pros:

Some of the Cons:

The City and our partners at CDA 2030 are interested in supporting the businesses and property owners with positive transformation of the East Sherman area and further evaluating roadway designs and enhancements but that will require us removing the Pilot Project roadway diversion and parklet seating structure.  We would like to get input from business and property owners on some of the other street design alternatives that were included in the draft East Sherman Revitalization Plan.  The plan is to reconvene the East Sherman Leadership Committee and bring on new members to vet some of these ideas and discuss other desired changes to the corridor.  Stay tuned for more information about East Sherman in the coming months.  To review the DRAFT East Sherman Revitalization Plan from December 2019 (not yet adopted by the City Council) click here. More background information is available on the East Sherman website: www.eastsherman.org. 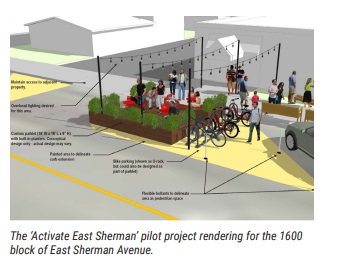 Based on community input and feedback from the East Sherman Leadership Committee, the planning document for East Sherman has been updated thanks to the help of Community Builders’ subconsultant, Cheney Bostic of Studio Seed!!

To see the latest and greatest “DRAFT” plan (it hasn’t been adopted or formally accepted by City Council yet), you can access it from one of the links below or from the eastsherman.org project website.  One of the changes you may notice is that the title has been updated to East Sherman District Revitalization Plan so that it wouldn’t be confused with master planning documents that are commonly part of urban renewal evaluations and because it doesn’t include detailed design or engineering drawings.

The goal is to schedule meetings/study sessions with the Leadership Committee, Planning Commission and City Council in Fall 2022 to review the revitalization plan and begin moving forward with implementation.

[DISCLAIMER: the plan has not been presented to, accepted or adopted by the City Council yet, and thus is subject to change!]

Visit the East Sherman website at www.eastsherman.org for more detailed project information and ways to participate.

For summaries of the strategy workshop and design studio, visit the links below.