Concept #1 presented three different options for redeveloping Independence Point and re-organizing the city parking lot for improved efficiency. Community input to the Concept #1 options appears to be evenly split between “keep all the parking” to “remove the all parking.” Realizing that the Four Corners/BLM Corridor is a master plan presenting concepts for future City Council direction, the steering committee decided to present the following three options in Concept #2:

Alternatives A and B include an ADA accessible route to and into the water, along with an accessible dock (exact location to be determined).  Benches and shade structures are also included. After evaluating the extensive motorized use in this area (cruise boats, jet skis, sea plane, 400 boat slip marina), the concept of expanding non-motorized use at this location was removed from the concept plan.

The following rendering illustrates how the waterfront promenade could be expanded to allow more seating and vendor locations, additional “beachside deck space” and an expanded pedestrian and bicycle trail. 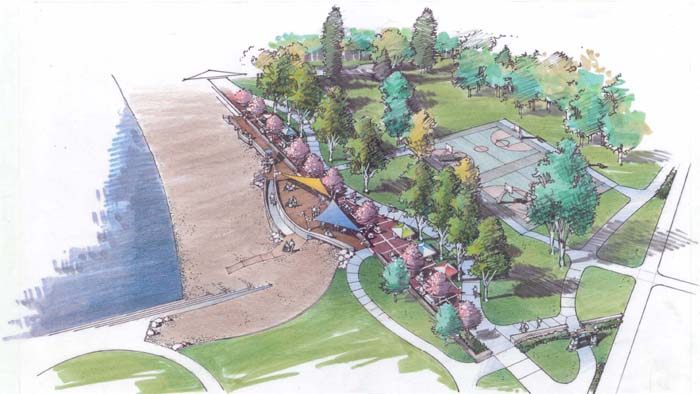