Coeur d'Alene was awarded "Bicycle Friendly Community" status in 2008 and again in 2012 by the League of American Bicyclists. This award is a nationally recognized designation that showcases cities that have dedicated themselves to promoting bicycling.

To be designated a bike friendly community the League of American Bicyclists looks at many different criteria: miles of trails and paths, connectivity, education, encouragement, enforcement, engineering, ordinances, the presence of advocacy groups, city policies and much more. When Coeur d'Alene was given a bronze designation, we joined the ranks of 289 other cities across the nation to be considered bike friendly. Currently there are 206 cities with the bronze designation, 61 with silver, 18 with gold and 4 with platinum. 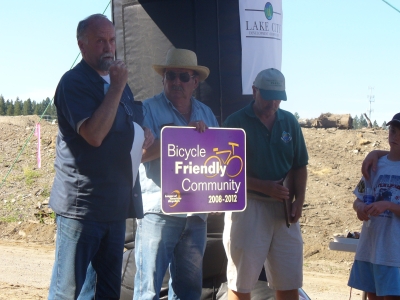