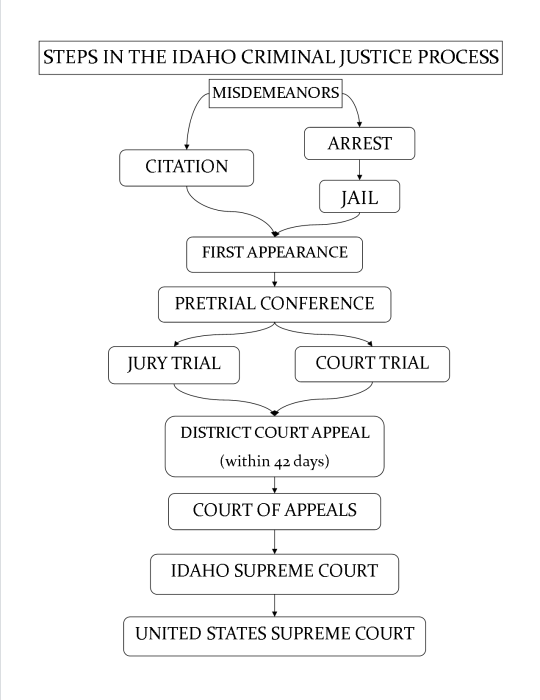 If a jury trial is chosen, there will usually be either two or three more court dates set. The first will be the pre-trial conference: the defendant, defense counsel if there is one, and the prosecutor all appear before the magistrate judge assigned to the case. The purpose of the pre-trial conference is to see if the case can be resolved short of trial or, if it cannot, to make sure that both the defense and the prosecution are ready for trial,

Those cases that don’t resolve at the status call will be assigned a third court date---the jury trial day--- by the judge from among the remaining days of the jury trial week. The defendant, his or her attorney, and any defense witnesses will need to be in court on the jury trial day. The prosecutor and all prosecution witnesses need to be in court then, too. A six-person jury will have to be picked by the parties from a panel of prospective jurors on the morning of the trial day. Then the trial proceeds: first the jury is given preliminary instructions on the law, then the parties can make opening statements, then evidence is presented, starting with the prosecution evidence; following the submission of all evidence, additional instructions on the law are given to the jury; then the parties present closing arguments to the jury; then the jury retires to the jury room to deliberate and reach a verdict.

If, on the other hand, a defendant at the misdemeanor arraignment waives the right to trial by jury and chooses to have a court trial (where there is just a judge and no jury), the next court date after the arraignment will usually be the trial itself. On the trial date the defendant, a defense attorney if there is one, the prosecutor, and all witnesses for both the prosecution and the defense need to be in court. Usually several court trials are set for the same afternoon. They will be tried one after the other, in whatever order the judge chooses to call them, until they have all been heard and decided that afternoon.

Pretrial Conference --- In traffic and non-traffic misdemeanor cases, this is the defendant's second court appearance. It is a scheduled meeting between an Assistant Prosecuting Attorney and the defendant (and his attorney) to determine whether the case will go to trial or be resolved with a plea. These meetings focus on resolving the case short of trial. The Judge and witnesses are not involved in misdemeanor pre-trial conferences. If a plea bargain is going to be offered by the Prosecutor, it is done here.

Pretrial Proceedings --- Many other events can occur prior to trial. Depending on the nature of the case, there may be pre-trial hearings on Constitutional issues (confessions, searches, identification, etc.). The issues are presented to the Court through written "motions" (e.g., Motion to Suppress Evidence, etc.). The judge must determine whether evidence will be admitted or suppressed at the defendant's trial, whether there is some legal reason why the defendant should not be tried, or decide other ground rules for trial.

A trial is an adversary proceeding in which the Prosecutor must present evidence to prove the defendant's guilt beyond a reasonable doubt. The defendant is not required to prove his or her innocence or to present any evidence, but may challenge the accuracy of the Prosecutor's evidence. Both the defendant and the Prosecutor (representing the People of the State of Idaho) have the right to a trial by a jury. Sometimes, both sides agree to let a Judge listen to the evidence and decide the case without a jury; this is called a "bench trial". In a jury trial, the jury is the "trier of fact"; in a bench trial, the judge is. After the evidence is presented, the judge or a jury will determine whether the evidence proved that the defendant committed the crime. Here is a general outline of the steps in a jury trial:

Subpoena: A subpoena is a Court Order directing you to be present at the time and place stated. You will be personally served with your subpoena. Bring the subpoena with you when you go to court because it will assist the court in processing the witness fees the law entitles you to receive. It also reminds you which court you are required to appear in and the exact time of your appearance. After receiving the subpoena, immediately call the City Attorney's Office and ask for the deputy assigned to the case; his or her name will appear on the subpoena. This allows the deputy an opportunity to discuss with you the facts of the case and the nature of the proceedings in which you will testify. Keep in mind that it is perfectly proper for the deputy to discuss the case with you prior to the court date.

A Defendant will receive a copy of the Judgment which, sets forth the sentence. The Judgment is a court order and failure to follow every term could result in either contempt of court or a probation violation being filed. Any questions about a Judgment should be referred to an attorney (if you have one) or you can contact the Office of the City Attorney-Criminal Division.

This section is to give people a quick overview of how the infraction court system works.