ArtCurrents is popular public art placement program in which the City, in essence, leases pieces of art for use in downtown Coeur d'Alene and the Riverstone area.

The City of Coeur d’Alene Arts Commission seeks artists annually to participate in its “ArtCurrents” program.    ArtCurrents pieces are displayed along Sherman Avenue, Lakeside Avenue, City Park, Atlas Waterfront Park, and the Riverstone area.  Artists submit applications for placement of their sculptures for a period of one (1) year, with an option to renew for a second year.  The selected artists or artists teams will be paid a stipend of $1,000.00 for the first year.  A second stipend of $1,000.00 will be paid to the artists at the start of the second year.  The displayed works are offered for sale, with the City of Coeur d’Alene receiving a 25% commission from the sale.

The next call will be published during the summer of 2023 through the CaFÉ website (www.callforentry.org).


Below are the pieces currently on display in the ArtCurrents program. 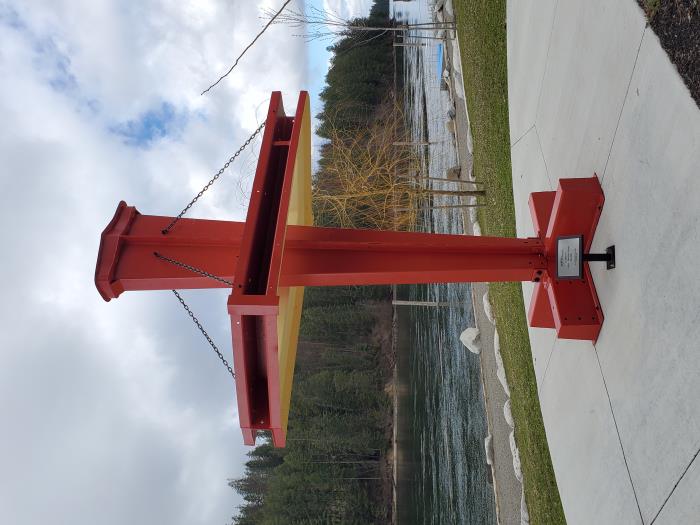 “Collared' is a painted steel piece made from repurposed building beams. In two parts the horizontal collar floats around the central post. Attached by chain the collar is able to move slightly in the wind. 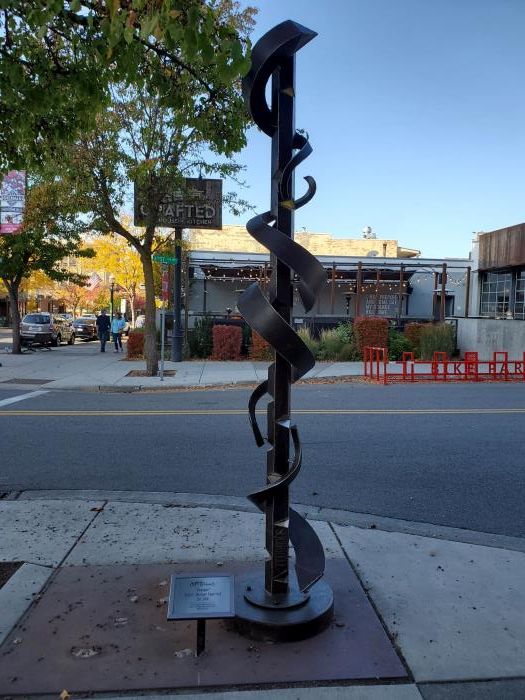 “Migration" is a ten foot (10’) tall bronze, steel, and stainless steel column of salmon representing the annual migration of the Northwest's signature fish species. Movement of the fish is demonstrated through angles and wedges similar to fins or tails of fish. 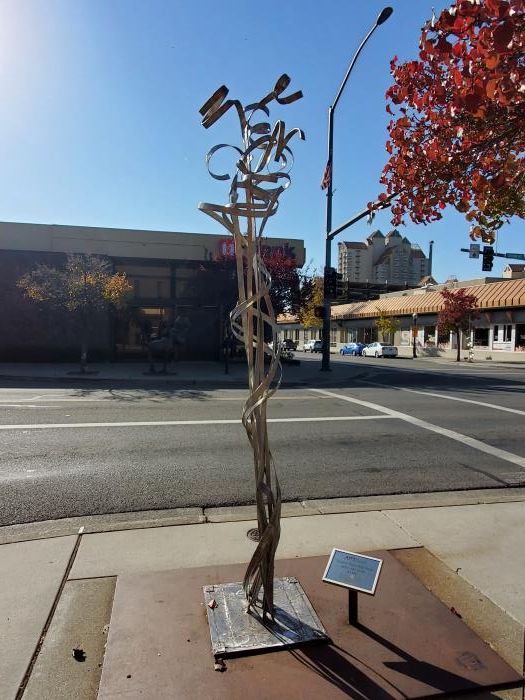 
“Timeline Theory Reflections" began with a conversation with an old friend about how our lives might be different if past decisions had been different. Perhaps our decisions create a path that can be traced. Perhaps those paths change with every decision. I turned those ideas into a plant-like sculpture. Paths, or timelines weave in and out. Some paths end up as dead ends, others join back into the main road. Perhaps the paths we didn't take continue without us. There is always implied motion. Life goes on. The stainless steel reflects the other paths as the decisions we make reflect on other decisions. The texture represents the texture of life. Sometimes it's smooth and shiny and sometimes a bumpy road.
The stainless also reflects parts of the environment including the red shirt the viewer is wearing. Just as our lives reflect the world around us. 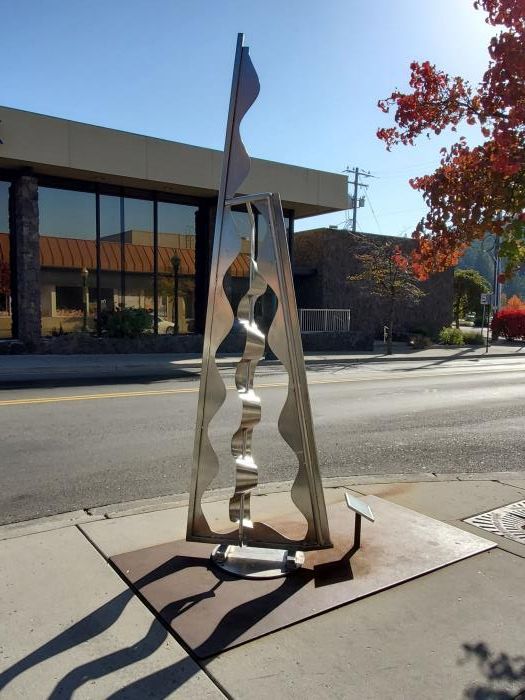 
The term ‘squared away’ used to have more nautical significance and now denotes anything that is in good shape. This jaunty sailboat is ready to head out on the lake, with sails full of wind. It is about 11 feet tall and just over 3 feet wide. 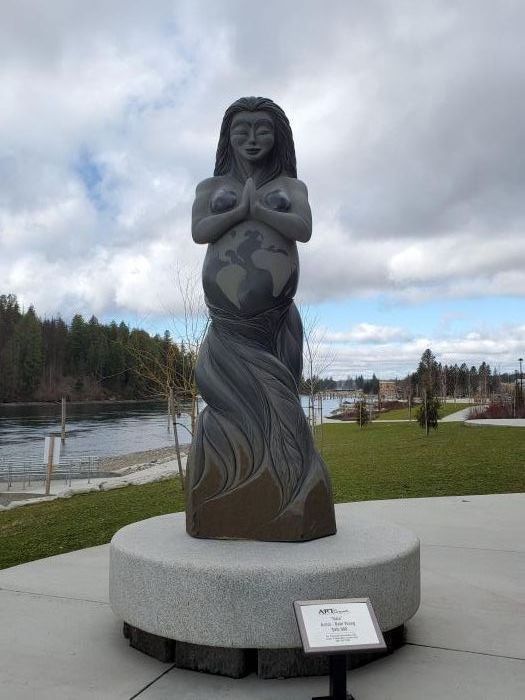 
Carved stone sculpture is a classic artform that has been around for thousands of years. This piece is made with columnar basalt from eastern Washington. It is called ‘Gaia’ or ‘Mother Earth’. Everyone who has seen it has used the same word to describe it – ‘beautiful’. Coeur d'Alene is also beautiful! A unique town on a gorgeous lake with access to trails paths and beaches. All due to our amazing natural environment. Mother Earth at her finest. Gaia's pregnant belly shows the oceans and continents. 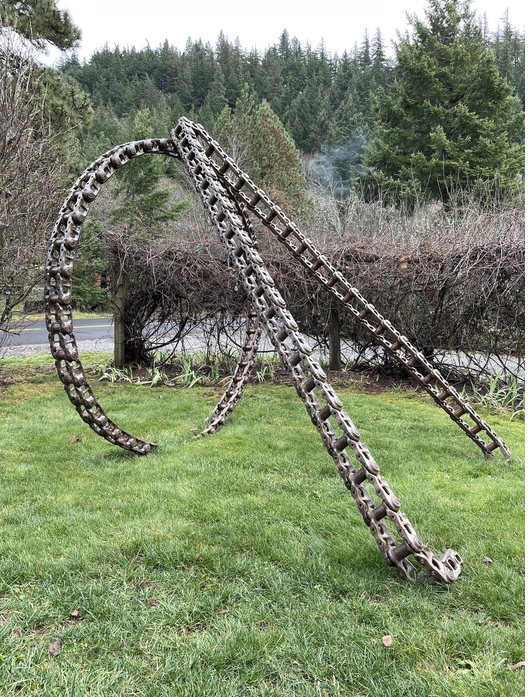 “Interconnected" is a piece made from the chain of a track hoe. It is two separate shapes, a circle and a triangle, that support each other. Neither could stand alone. Together they are more than just two shapes.
It is a simple shape/idea that could be applied to society in general. Most people can relate to a chain, and the question is frequently "how big a bicycle did that come from?” 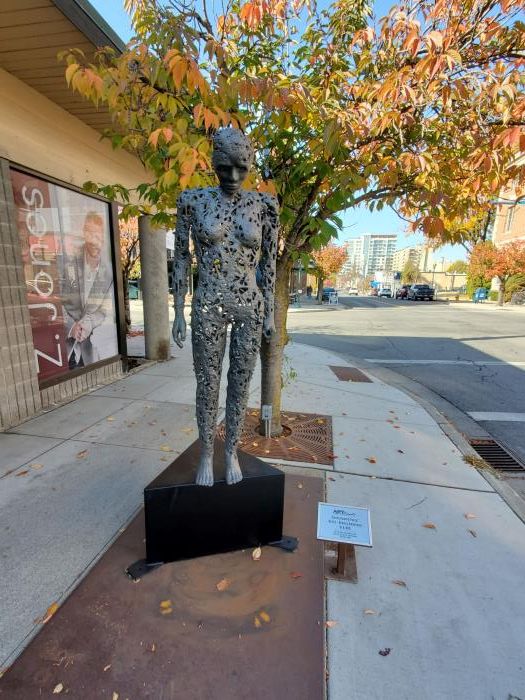 Public art matters, it adds meaning to our cities and directly influences how people see and connect. My goal is to create artwork that encourages people to question, interact and establish a unique and culturally active space. I sculpt stories for others to explore, contemplate and decide for themselves the meaning for what they see. Quality and longevity are very important to me. I strive to construct works that will stand the test of time.
Inspired by the courage it takes to stand up for what you believe in. Even if it means standing alone. 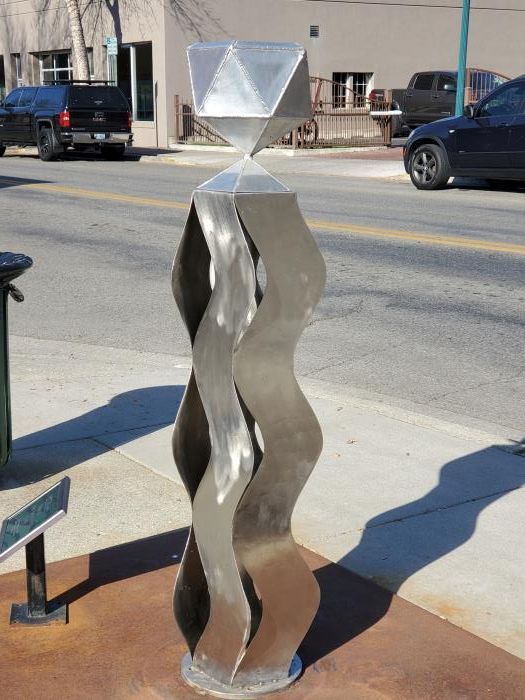 “The Voyager" looks out toward the horizon or the future. The "waves" that make up the body represent the river and the sound of the waves carried by sine waves over the treetops.
This is an optimistic sculpture, an adventurer with a scale that is relatable to adults and children. 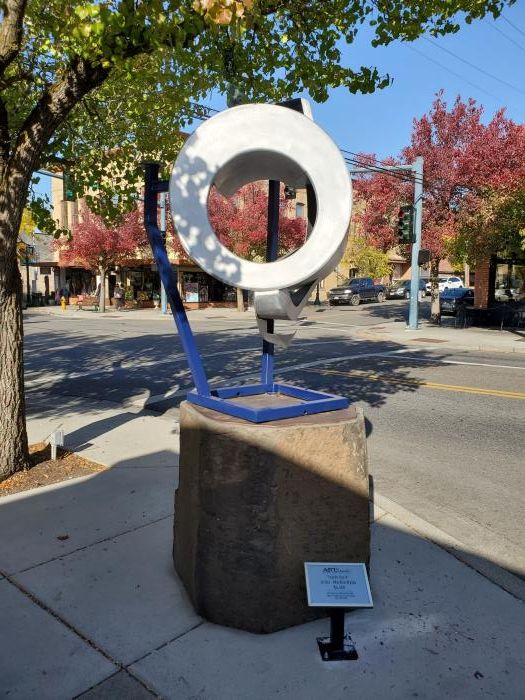 “Inside Out 9” is one of a series of pieces that explores how the structure describes the finish shape and character of the piece. The interior form is supported by an exterior structure. The frame and construction details are left exposed. 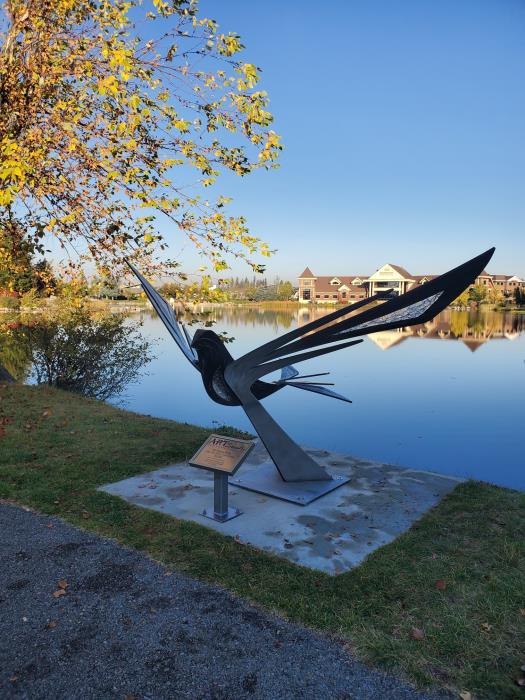 What the world needs now are peaceful transitions from all the sickness and shouting to healing and positive change.  We chose the dove, a universal symbol of peace, to convey our hopes for a healthy, prosperous and meaningful future for all of us. 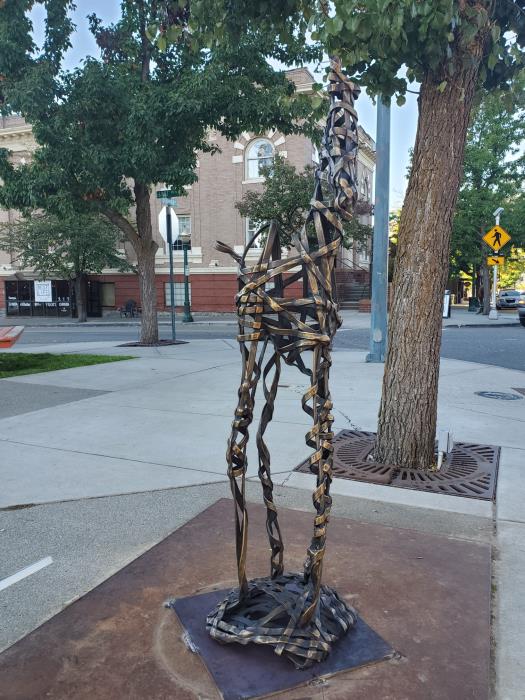 The horse is important in the American West, not only because of its dutiful service but also because of its “space changing” effect on our human psyche.  I hope this sculpture captures a sense of wild nobility while creating energy between its vertical expression and a perceived sense of space. "Reins" is comprised of a single band of cast bronze.  The working process starts with a solid form and a band of wax.  At first, the original form determines the direction that the band travels, but soon, it starts to respond to its own structure.  Intersections emerge as secondary forms and the traveling line responds to these in turn.  The result is a history of the original form intrinsically combined with an explicit depiction of the boundary between form and space. 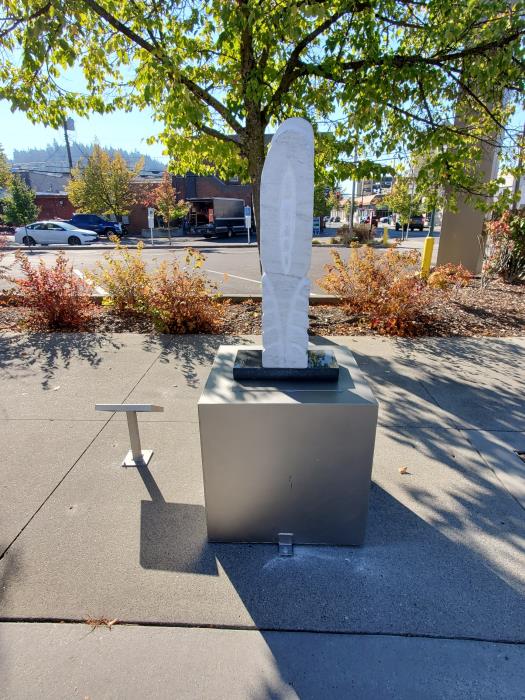 Public art that engages and interacts with people while maintaining visual integrity with surrounding architecture and natural landscape.  "O’Keefe 8" is three feet (3’) high realized in Nootka Marble.  It is part of the series in stone honoring the work of American artist Georgia O’Keefe.  Made of stone, the most organic and environmentally sustainable material in history, accessing the power of earth for positive community involvement.
Stone is climate friendly with zero harmful emissions or toxic materials created during fabrication. 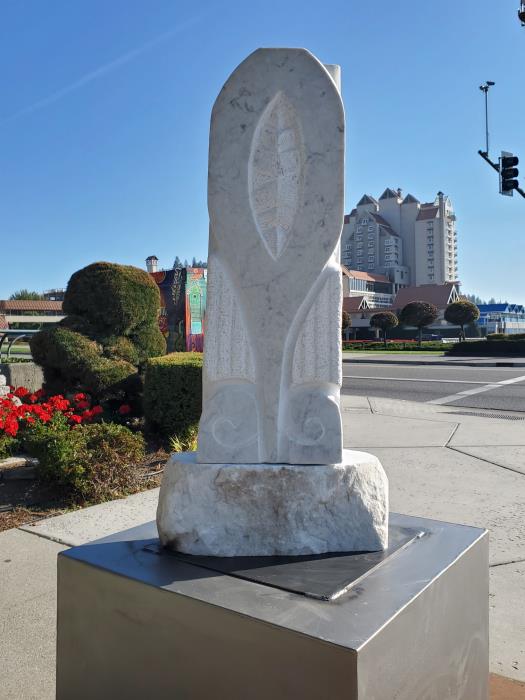 Public art that engages and interacts with people while maintaining visual integrity with surrounding architecture and natural landscape.  "O’Keefe 9" is three feet (3’) high realized in Nootka Marble.  It is part of the series in stone honoring the work of American artist Georgia O’Keefe.  Made of stone, the most organic and environmentally sustainable material in history, accessing the power of earth for positive community involvement.
Stone is climate friendly with zero harmful emissions or toxic materials created during fabrication. 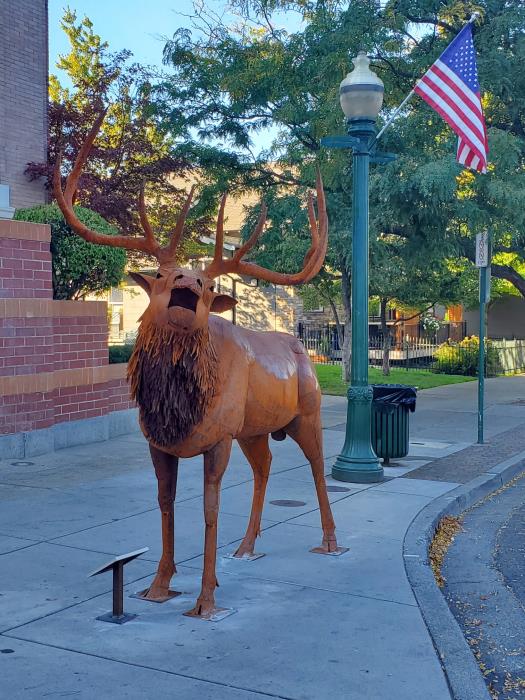 "Responding to a Rival"

This piece was inspired by one of the northwest’s icons; the regal and majestic elk that live throughout the region.  True Northwesterners love this symbol of the northwest and really appreciate the large antlers that they wear as a crown.
The piece captures that majestic look and provides the opportunity to see up close, just how big these animals are by creating the piece in life-size form.