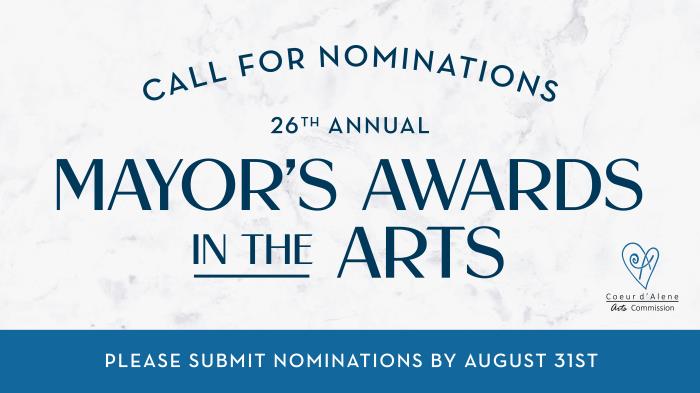 The City of Coeur d’Alene Arts Commission is accepting nominations for the 26th Annual Mayor’s Awards in the Arts.  Nominations may be submitted by art organizations, individuals, businesses or students and must be received by August 31.

The Mayor’s Awards in the Arts are presented by the Coeur d’Alene Arts Commission and the City of Coeur d’Alene to recognize and encourage excellence in the arts and to stimulate and support awareness of the arts throughout the community.  Nominees may be businesses, organizations, individuals or students who have, through distinguished service or creative accomplishment, made a significant contribution to the arts in Coeur d’Alene, but need not be based or have residence within the City Limits.

Download a nomination form at https://www.cdaid.org/518/committees/arts/mayors-awards-in-the-arts, or contact Sherrie Badertscher, Coeur d’Alene Arts Commission staff support, at (208) 666-5754 to request a form.  You may also pick up a nomination form at City Hall, located at 710 Mullan Ave.

The Mayor’s Awards in the Arts is held each year in October.